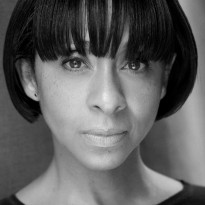 Marcia trained at the Guildford School of Acting, Surrey.

Marcia has appeared in numerous projects such as:
Virgin Trains, Boots Beauty Products, McDonald’s Burgers and for Barclays Bank.
Marcia is also a skilled voice-over artist and has worked on various Council projects and has used her “silky” voice as a Presenter for
many companies.

Marcia is pleased to make her West End debut at the Garrick Theatre.
Marcia would like to thank her family & friends for their continual support.