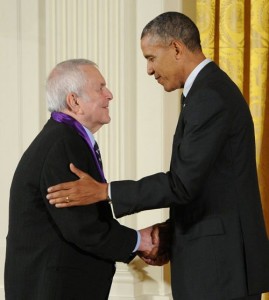 Congratulations to John Kander for being awarded a National Medal of Arts by Barack Obama at the White House on Monday 28 July 2014.

John Kander is recognized for his contributions as a composer. For more than half a century, Mr. Kander has enlivened Broadway, television, and film through songs that evoke romanticism and wonder and capture moral dilemmas that persist across generations.